How to Buy Stocks: All You Need to Know

Stocks are a key asset in any investment portfolio. Although there are many other options nowadays, most beginners and experienced investors buy and sell stock to generate returns from share price fluctuations or earn long-term income through dividends. Despite the increased risk compared to other assets, such as bonds, stocks can be an excellent method to grow your money over time and even outrun inflation.

In this guide, we summarise what you need to know about stocks, stock markets, and stock brokers (hereafter “stockbrokers”), and we suggest some stocks you might consider buying.

To buy and sell stocks, you need to sign up for an account with a stockbroker, which these days will most likely be an online stockbroker. You should be able to open a stock trading or “share dealing” account within minutes by entering some personal details into the online application form. Be prepared to prove your identity to fully activate your account.

2. Decide Which Stocks to Buy

Although we suggest some stocks in this guide, it’s always important to do your own fundamental analysis (company financial health) and technical analysis (share price chart) before investing. Search or scroll through the broker’s list of stocks to find the ones you have determined to be the best candidates. Click each one to see additional details or open a trade ticket.

You buy stocks immediately (at the current market price) by submitting a trade ticket. Alternatively, you can buy a stock at a later time — when the markets next open or when the price is at a particular level — by submitting an order ticket instead. Either way, you’d have to enter the amount you wish to invest in the stock or the number of shares you wish to buy.

When talking or reading about investments, you’ll often find the terms “companies”, “stocks”, “shares”, and “equities” used interchangeably and confusingly. Although these terms are somewhat synonymous, there are some subtleties to be clarified:

A company is a legal entity that conducts business, e.g., Microsoft or Tesla. Investors take part-ownership of a company by buying shares of a company’s stock (which is the sum total of all the company’s shares). Confusingly, the term “stock” is sometimes used to mean a company (e.g., “buy Apple stock”) and sometimes used to mean a share of a company (e.g., “buy Apple stocks”). Shares (or stocks) are often referred to as equities because you take an equity stake in a company.

Those subtleties aside, the terms “stock market”, “equity market”, and “share market” mean exactly the same thing, as distinct from other markets — such as commodities or foreign exchange (forex) markets — that don’t involve taking equity stakes and company stocks by buying shares.

How Do Stock Markets Work?

Most likely, you’re not rich enough to have a direct relationship with the stock exchanges, so you’ll buy and sell shares by signing up with an online broker that does have a seat on (or membership of) one or more stock exchanges.

For each stock that a broker lets you buy or sell, it will present you with a buying price (the “ask”) and a selling price (the “bid”). The “ask” price is almost always higher than the “bid” price because the broker will buy your shares back at a lower price than they sold them to you in the first place, which is one of the ways that a broker makes a profit— just like a used car dealer does. Ideally, you want to buy shares with a small bid-ask spread so that you don’t lose too much money before the share price has even moved.

Share prices move up and down as companies’ stocks become more or less valuable in the minds of investors, which might be because of something tangible such as an innovative new product, or it might simply be because a particular stock has become popular (or unpopular) among speculators. As a trader, you make money by buying stocks whose share prices you think will rise.

Stocks are often categorised into types according to various criteria, for example, by size or sector.

You will often see stocks categorised by size:

“Large-cap” or “big-cap” stocks represent the biggest companies in the world, which have a market capitalisation (what it would cost you to buy all the company’s shares) of more than $10 billion. Examples are titans such as Microsoft, Walmart, and Mastercard.

“Mid-cap” stocks are middle-ranking companies valued at between $2 billion and $10 billion.

“Small-cap” companies are businesses with market capitalisation between $300 million and $2 billion.

Stocks are sometimes categorised by the industry sector in which the companies operate. You might read about “bank stocks” like Wells Fargo or Barclays, or “telecoms” stocks such as Vodafone or Verizon.

Should You Invest in Stocks?

Whether or not you should invest in stocks depends on many factors, including your wealth, age, interests, and appetite for risk.

Some people say that stock markets always rise in the long run, and this appears to be true if you look at charts of stock indices such as the S&P 500. The case for stocks looks like an open-and-shut case until you consider that anyone who bought the stock in this index in June 2000 would not have seen a profit until December 2012 and would have experienced a 50% fall along the way. So, the question is, could you keep your nerve for more than twelve years if you saw your investment funds fall by half? 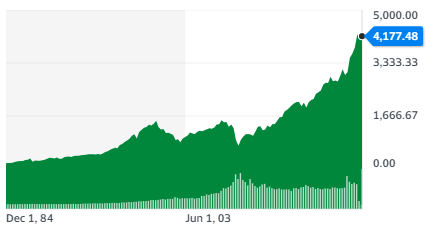 Ultimately, it’s so far, so good, for a stock index that is composed of 500 stocks. But what about any single stock? For a company like Microsoft, the long-term chart looks even better than the S&P 500. However, if you invested instead in Wirecard AG at any time in the past five years, you would be looking at the following price performance. Put simply, this company went bust and wiped out all the investors. 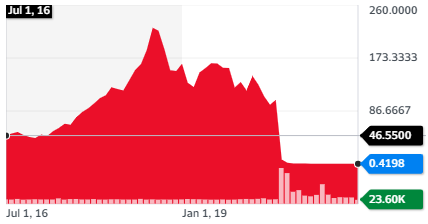 Taking the two chart examples into account should help you understand that the two general rules for stock market investment are:

One more thing. With stock investments, it’s not all about share price appreciation. Long-term investments collect dividends along the way, which could ultimately pay back your original purchase. The “rule of 72” says that a 7.2% dividend yield will repay your initial investment within ten years even if the share price stands still. With a more realistic 3.6% dividend yield, you will get back your invested cash in 20 years’ time.

Armed with the facts about stock investment, you can now ask yourself the question. Should you invest in stocks?

Pros and Cons of Investing in Stocks

Stocks (or at least stock indices) always rise in the long term
Stocks have historically paid better returns than bank accounts
You can benefit from share price appreciation and dividend receipts
It is easy to buy stocks via an online broker
Stocks are easier for most people to understand than other assets, such as currency pairs

Where to Start Trading Stocks?

To trade stocks, you need a broker. The broker you choose should be regulated (so that you know you’re in safe hands) and should meet other criteria such as low costs, good customer service, and offering a range of educational resources. We have saved you some time when researching brokers by suggesting some here.

Things to Consider When Buying Stocks

When buying stocks, you should take fundamental analysis and technical analysis into account.

Fundamental analysis means assessing a company’s financial health in terms of its profitability, the dividends it is expected to pay, and other factors. It helps you decide which stocks to buy.

Technical analysis means studying a stock’s price chart to look for classic “patterns” that suggest if the price is likely to go up or down in the future. It helps you decide on the right time to buy a stock.

Things to Consider When Buying Stocks

“ When buying stocks, you should take fundamental analysis and technical analysis into account. Fundamental analysis means assessing a company’s financial health in terms of its profitability, the dividends it is expected to pay, and other factors. It helps you decide which stocks to buy. Technical analysis means studying a stock’s price chart to look for classic “patterns” that suggest if the price is likely to go up or down in the future. It helps you decide on the right time to buy a stock. ”
- Shams Ul Zoha

The answer to the question “what are the top stocks to buy right now” depends on when “right now” is, but we can suggest some stocks to buy for three different reasons. The reasons are as important as the stocks.

Cruise lines were one of the hardest-hit industries during the coronavirus pandemic, so it’s no surprise that the price of Carnival shares fell from 3644 (in December 2019) to 981 (in March 2020). As we recover from the coronavirus crisis, Carnival shares have also recovered, to reach 1736 by June 2021. The uptrend could continue for many months or even years as the cruise liner rebuilds its business.

Banking stocks have been beaten down ever since the 2007/2008 financial crisis due to central banks keeping interest rates historically low. Banks make more money when interest rates are high, and central banks have to raise interest rates when inflation (rising prices) looks like it is getting out of control. The good news for holders of Barclays shares is that inflation appears to be starting to take hold at the midpoint in 2021.

Tesla (NASDAQ: TLSA) — A Growth Stock to Buy on a Dip

A growth stock is a non-dividend-paying company that is growing at a rate significantly above the market average. Electric vehicle and energy storage innovator Tesla is (or has been) such a growth stock; it doesn’t pay dividends, and its share price ended about ten times higher than it started in 2020. Does this mean it’s too late to buy into Tesla’s growth story? Not necessarily, because the share price fell back between January and June 2021, and many investors buy shares when companies’ share prices “dip” in this way.

As an investor, stocks are where it’s at if you want to generate inflation-beating and bank interest-beating returns over the long term through a combination of capital appreciation and dividend income. At the other end of the timescale, day traders make smaller, more regular profits by buying and selling stocks within the same trading day, but this is not advisable unless you really know what you’re doing.

One of the best things about investing in stocks is that it’s entirely virtual. You don’t have to set up and run a business like Barclays Bank or BAE Systems in order to make money from businesses like those.