Crude oil prices continue to rise, pushing inflation and inflation expectations up. Towards the end of the last week, the WTI crude oil price traded well above $90/barrel. More precisely, it traded above $93/barrel, fueling rumors that it would soon trade at $100/barrel. So what does the technical picture tell us?

The COVID-19 pandemic triggered one of the most spectacular declines in a financial asset price in financial markets’ history. When the WTI crude oil price was allowed to settle below zero for the first time ever, it was a clear sign that demand vanished.

After all, with economies in lockdown, goods stopped moving from one part of the world to another.

But that changed quickly.

The fastest economic recession was followed by the quickest economic recovery ever. As a result, the price of oil bounced back higher and traded above $93/barrel most recently.

What does the technical picture say with $100/barrel in sight?

The market looks strong enough to reach $100/barrel. After all, the series of higher highs continues with the recent print above $93/barrel.

The reaction from dynamic resistance looks normal, as it happened before. Moreover, the subsequent decline was not strong enough to invalidate the higher lows series – another bullish technical argument.

Considering the importance of oil trading above $100/barrel, at least from a psychological perspective, one may say that the path of least resistance remains the upside. $85/barrel now acts as horizontal support, while the series of higher lows would only be invalidated by a move below $65/barrel.

In other words, the drop to invalidate the bullish case is much bigger than the distance to the $100/barrel. Hence, bulls would likely use their resources and buy the dip. 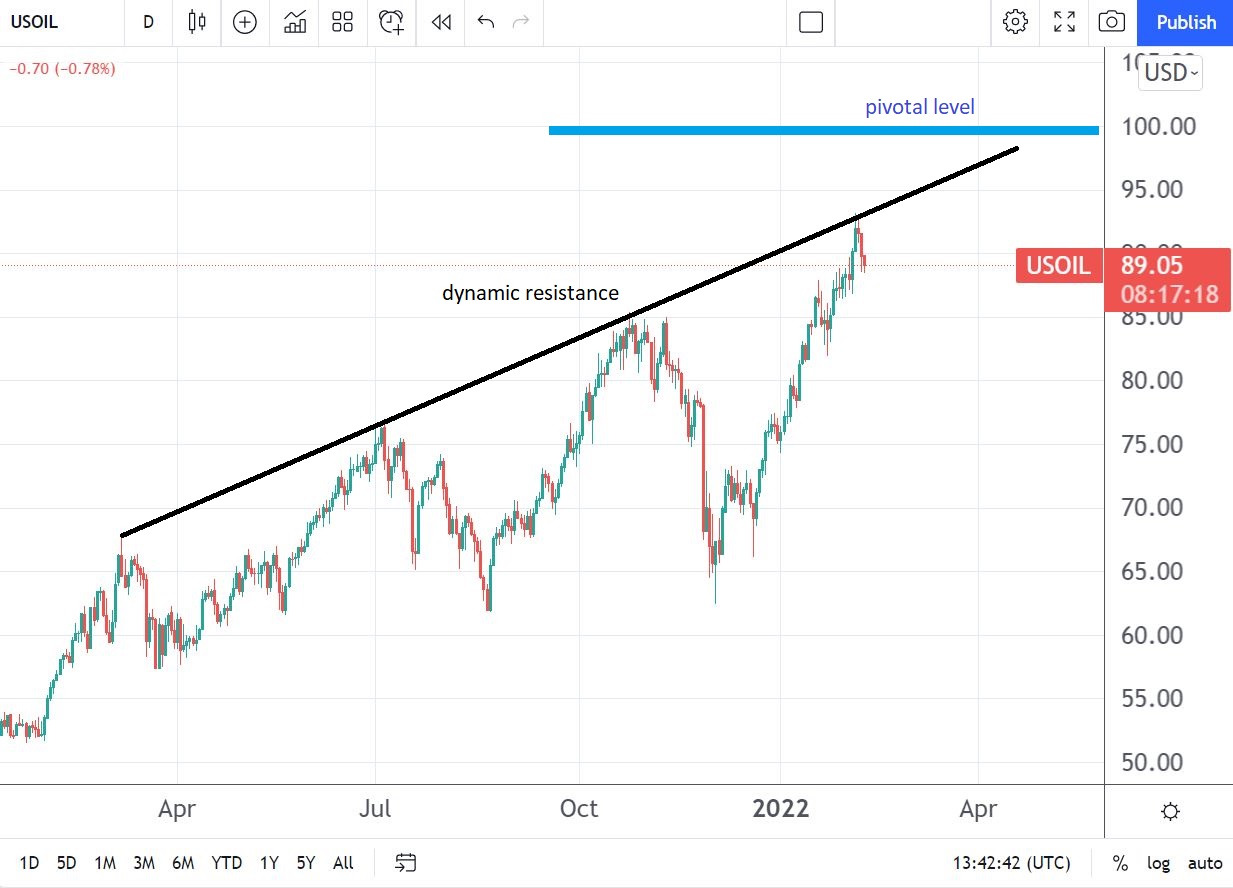 How about the fundamental one?

Fundamentals are strong. Demand outpaces supply, OPEC+ is happy with the current production plan, and the global economic growth forecasts are optimistic.

The only risk to even higher oil prices comes from the negotiations between Iran and the world leaders. Yesterday, the 8th round of negotiations began in Vienna, and the Iranian oil is the wild card that may weigh on the WTI crude oil price in the short term.