Home > Will October 2021 Be the Worst Month to Invest in Stocks?

“October: This is one of the peculiarly dangerous months to speculate in stocks.” — Mark Twain, Pudd'nhead Wilson

Do you know that the 1929, 1987, and 2008 stock market crashes all occurred in October? Do you know that these were predicted by American writer Mark Twain (aka. Samuel Clemens) in his 1893 novel, The Tragedy of Pudd’nhead Wilson?

Read on to find out if the Mark Twain Effect is real and whether it will affect your investment returns. The answer might surprise you.

What Is the Mark Twain Effect?

It’s true that a line in Mark Twain's Pudd'nhead Wilson — which I’m sure you’ve all read — suggests that, "October. This is one of the peculiarly dangerous months to speculate in stocks.”

It’s only semi-serious because the line continues with: “The others are July, January, September, April, November, May, March, June, December, August, and February.”

In short, the suggestion is that speculation in stocks is always dangerous. That’s true, but maybe only for uninitiated investors who don’t know what they’re doing.

American stock markets, in particular, are still near all-time highs right now, and you might think that what goes up must come down— especially in the inauspicious month of October. However…

If you bought stocks in any October during the past decade and held them till now, you’d be sitting pretty. And last October was a particularly good time to have bought stocks in the wake of the February 2020 market crash, to make a 33% profit within a year. 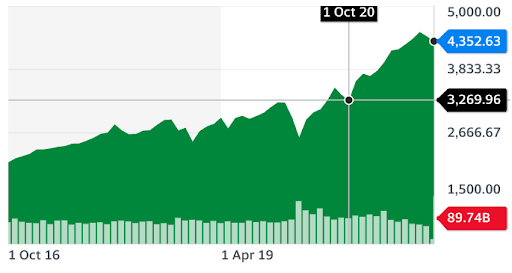 If you think that the October Effect as it’s also known is pure hokum, you should be investing in stocks via an online broker now. If you’re a superstitious sort who believes — like Chicken Little — that the sky is about to fall down, you should sign up with a broker now anyway, so that you can buy stocks at better prices soon after the October crash comes. And if you’re more adventurous, you might even “short” the markets meanwhile to make money from the correction.

Whatever you want to do, be ready by checking out these best brokers:

eToro is one of the world's leading multi-asset trading platforms offering some of the lowest commission and fee rates in the industry. It's social copy trading features make it a great choice for those getting started.