Gold price recovered some of the recent losses and now trades back above $1,800 at the start of the week’s last trading day. Wells Fargo hit a new fine, Kroger reports Q2 2021 earnings today.

The trading week was dominated by three central banks that delivered their monetary policies in Australia, Canada, and the Eurozone. Investors focused on what the European Central Bank (ECB) would do as the expectations were that it would slow down the pace of the asset purchases under its pandemic emergency program. Only it did not call it tapering, rather a recalibration.

No matter what you call it, one thing is sure – central banks prepare for the gradual removal of economic stimulus, and markets start noticing.

As such, the equities had a hard time making new highs this week. In fact, the U.S. equity indices corrected from their highs, even though the correction was not that significant. The Dow Jones index, for example, traded below 34,900 points, but it found buyers on every dip so far.

The back and forth in the U.S. equities led to similar price action in other markets. Take the commodity markets, where gold regained the $1,800 level after declining earlier in the trading week. The oil keeps finding buyers despite being unable to hold above $70.

In Europe, the equity markets have suffered all week so far. The most visible declines were in Germany and the United Kingdom. The Dax index in Germany is well off its highs, trading at 15,600 points at the start of this session, while the FTSE 100 index has found support at the round 7,000 level.

The risk-on sentiment may come back in the last trading session of the week. Because the EUR/USD exchange rate held the 1.18 support and the USD/JPY keeps flirting with 110, they signal resilience in the stock market. As such, we should not be surprised to see risk rallying as the trading week comes to an end.

Today's main events come from Canada and the United States. In Canada, the unemployment rate is expected at 7.3% in the previous month, improving from 7.5% a month later. In the United States, the PPI and the Core PPI data will give investors further clues about the rise in inflation. This is the change in the price of goods and services at the producers' levels, and it is usually passed to consumers later down the road. The market expects the Core PPI to increase by 0.5% and the headline PPI by 0.6%. 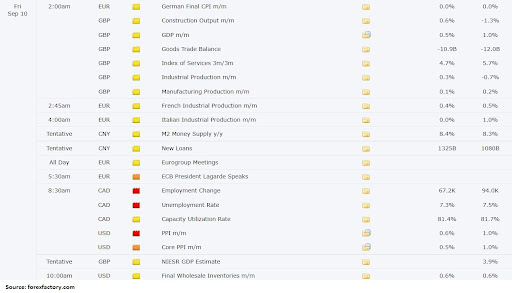 Today's markets to watch are gold, Kroger, and Wells Fargo. 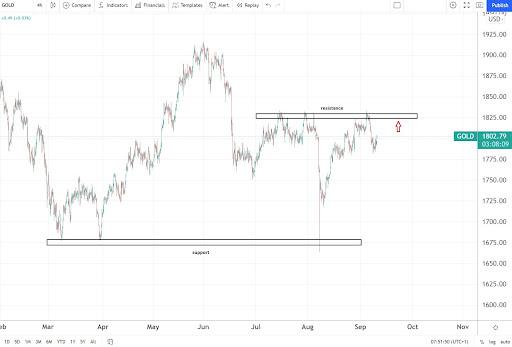 Except for a correction at the start of August, the price of gold was relatively stable this summer. It struggled to hold above $1,800 as the resistance at the $1,825 is difficult to break. Moving forward, a daily close above $1,825 would be bullish for the price of gold, likely signalling ongoing U.S. dollar weakness in the short term.

On the flip side, only a drop below $1,675 would send a bearish signal. While in between the two levels, the market will likely consolidate further. Investors use gold and other commodities to hedge against inflation, but gold failed to do so this year.

In fact, it is well off its 2020 highs, while inflation has increased sharply. Because of that, many investors believe that it is just a matter of time until gold closes the gap, explaining the buying interest from lower levels. However, unless it deals above $1,900, the price of gold will have a hard time closing the gap. 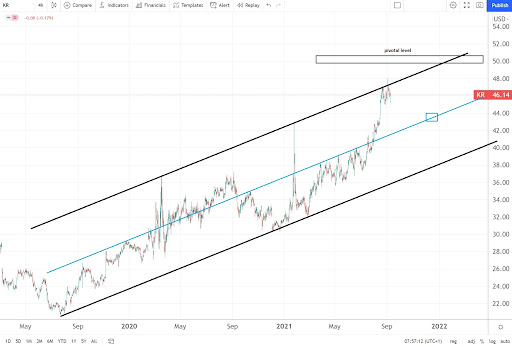 Kroger reports its second-quarter earnings today. The market expects the retailer to beat expectations, as its peers did. From a technical perspective, the stock price is at dynamic resistance given by the upper edge of a rising channel.

While sitting close to its record-high levels, the $50 area looms large, likely to attract better than expected earnings. On a miss, the first support is seen at $44, which corresponds to half the distance of the rising channel, which typically acts as a dynamic support. All in all, Kroger stock price remains bullish while in the rising channel, and the bias is that it will beat expectations on today's earnings release. 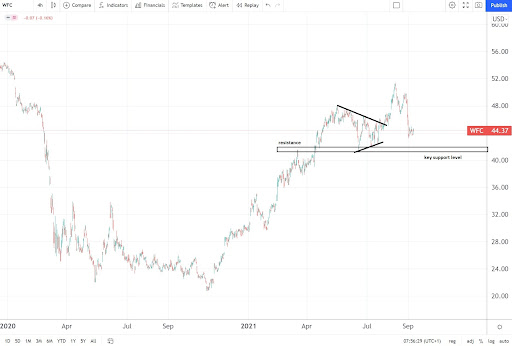 Wells Fargo stock price is in focus today as the company is fined $250 million by a U.S. banking regulator. The bank failed to pay back previously harmed customers. The price is down from the recent highs as the $50 area acted as strong resistance. A drop below $40 would put further pressure on the Wells Fargo stock price as it marks the break of the higher highs and higher lows series, characteristic of a bullish market.

This week brought mixed price action in financial markets. The U.S. and European equities have declined so far, with the FTSE 100 index dropping back to the 7,000 level, while the British pound gained against the euro and the U.S. dollar.