Dow Jones trades near record-high levels ahead of the September jobs report. Investors’ optimism continues as the U.S. economy is booming. Autodesk and Alibaba shares are in focus today.

The trading week ends with investors awaiting the most important piece of economic data – the Non-Farm Payrolls (NFP) report in the United States. The Dow Jones and the rest of the U.S. indices traded with a bid tone all week. Yesterday, the Nasdaq 100 and the S&P 500 made new all-time highs, while the Dow sits close to record levels.

The enthusiasm in the United States is seen in Europe, too. While the European stock markets did not perform as the U.S. ones, they were supported by the direct correlation that exists between the two. The German Dax index trades above 15,800, a couple of weeks before the introduction of ten new companies in its componence.

FTSE 100 in the United Kingdom performed well this week, too. It now trades above 7,150 points and the bias moving forward remains bullish.

On the currency market, one theme dominated the trading week, and that was the weak dollar and Japanese yen. The combination of the two created a tailwind behind the stock market and the risk-on sentiment. Investors bought the euro from the start of the trading week and the bullish bias persists.

The EUR/USD and the EUR/JPY trade at their weekly highs ahead of the jobs report, probably fueled by investors who believe that the European Central Bank will start removing the accommodative conditions soon. The next ECB meeting is scheduled for next Thursday.

On the commodities front, the WTI oil price traded above $70 once again, following the OPEC decision to leave the supply levels unchanged. Silver, gold, and copper remain well bid, too. The relentless bullish bias behind the price of oil is the one that fuels the risk-on rally.

Financial markets are strongly correlated and, in the aftermath of the 2020 drop, the correlation tightened even more because all central banks responded in a similar fashion. In other words, there are no differences between the monetary policies in different jurisdictions, and so everything moves in unison.

Today is a big day for European and U.S. markets. In Europe, the Final Services PMI and the Retail Sales are expected at 55.5, respectively 0% on the month. In the United States, all eyes are on the NFP report. The market expects the U.S. economy to have added 720,000 new jobs in August, but the private payroll report released two days ago indicates that the risk is skewed to the downside.

Ahead of the long weekend due to the Labor Day holiday on September 6th, the ISM Services PMI is the last piece of economic data that might move financial markets.

Today’s markets to watch are Dow Jones, Alibaba, and Autodesk. 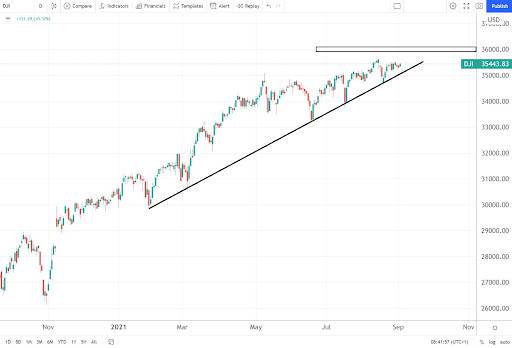 It is difficult to argue with such a bullish trend, but at the same time, the market seems vulnerable. The bullish bias persists as long as the Dow Jones index remains above the rising trendline. Also, unless the series of higher highs and higher lows is broken, the bulls will keep pushing the index to new all-time highs. The 36,000 level is the next pivotal one and a daily and weekly close above would put further pressure on the upside. On the flip side, a drop and close below the 34,000 would be bearish, especially ahead of the long weekend. 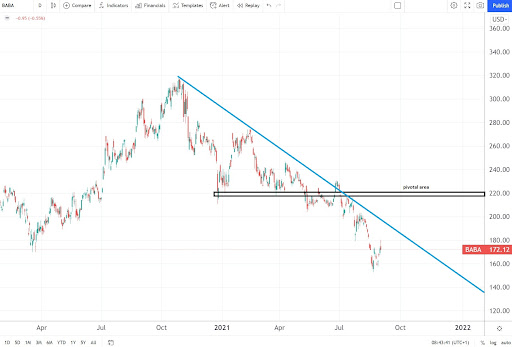 Alibaba is one of the Chinese tech companies that suffered the most after the government changed the regulations on the sector. It is down significantly from the highs, and the bearish bias persists while below the falling trendline. Only a daily close above $220 would swift the bias from bearish to bullish, but there is a long way until that level.

Many investors wanted a correction to buy Alibaba shares due to the company’s strong financial position, but the government’s intervention keeps investors aside. Most recently, Alibaba pledged close to $16 billion to Beijing’s “common prosperity” drive, an initiative meant to distribute wealth in China.

Autodesk is off its highs following the company’s analyst day presentation. Morgan Stanley, for example, kept its neutral recommendation but changed the stock price target from $334 to $324. One of the reasons for doing so was the poor cash flow position. But Morgan Stanley was not the only one to lower the price target, and the overall bearish sentiment quickly triggered a sharp move in the Autodesk stock price. The market is currently testing dynamic support at the rising trendline, but one cannot rule out a drop below $260. 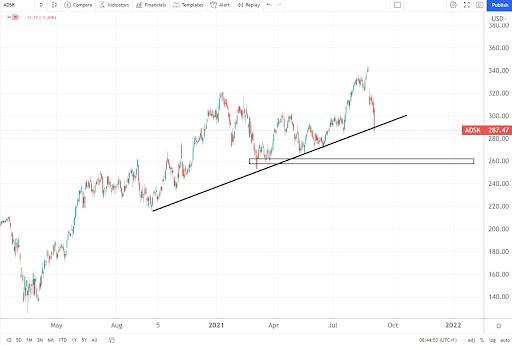 The trading week was dominated by a strong U.S. equity market performance despite some poor economic data such as the private payrolls released on Wednesday that missed expectations drastically. Also, the WTI oil price regained the $70 area, further boosting the risk sentiment. The euro traded with a bullish bias the entire week, as investors prepare for the ECB meeting scheduled for the next Thursday.

The U.S. dollar remains weak ahead of the September jobs report. Also, the Japanese yen has declined the entire week so far.