Crude oil price dropped below $65 this week, triggering a risk-off move. The U.S. dollar gained across the board as equities in advanced economies suffered.

The trading week was marked by a risk-off sentiment. The WTI crude oil price is way off its highs, breaking below the pivotal $65 area. If the weakness continues, we should not rule out a move below $60, lifting a bit the pressure from central banks and their inflation-targeting framework.

But, lower oil prices brought a tantrum in financial markets. Equities declined, albeit not so aggressive as one might have initially thought. The Dow Jones is well off its record highs, trading below 34,600 and moving with a bearish bias. The S&P 500 and the Nasdaq 100 are weak as well.

Chinese equities remain under pressure as the tech sector continues to decline. Alibaba Group dropped another 4% in the last Asian session, while panic selling continues.

The main event of the trading week was on Wednesday when the Federal Reserve of the United States revealed the minutes of the last FOMC (Federal Open Market Committee) Meeting. The minutes show what the members discussed, and they mentioned the word “tapering” (of asset purchases) over 40 times. In other words, tapering is coming, although the official announcement has not yet been made.

There are growing expectations that the Fed will make the official announcement at the September meeting in three weeks from now. Moreover, the Fed will start tapering at the end of the trading year, most likely in December.

Equity markets fell after the minutes were released and kept moving with a bearish bias. In Europe, the main indices are off their recent highs, but the selling was not so aggressive as in China or even in the United States. As such, the Dax index in Germany opened the last trading day of the week down half a percentage point, the U.K.’s FTSE 100 holds above 7,000, and the CAC 40 in France holds above 6,500.

Gold continues to put pressure against the $1,800 level without much success. It traded with a bid tone all week, as buyers stepped in on every dip.

After the FOMC Minutes, the U.S. dollar gained across the board. One day before, the weak retail data in the United States ignited a move higher in the dollar, a move that is still ongoing. The Dollar Index reached its highest level in 2021.

Today’s economic calendar is very light, so the focus will be on the U.S. equity markets and the U.S. dollar. Canadian dollar traders may want to watch the retail sales data, especially the core retail sales expected to rise by 4.5% this month. The USD/CAD pair rallied the entire week, now threatening with a move above 1.30.

The price action today will be influenced by traders already positioning for the main event of the month, scheduled at the end of the next week – the Jackson Hole Symposium in the United States.

Today’s markets to watch are oil, Salesforce, and Dell. 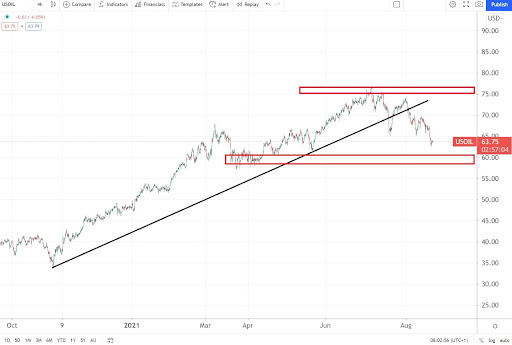 WTI oil dropped below the main rising trendline. The focus now shifts to the $60 area, which acted as a pivotal one before. A daily close below $60 would imply further weakness, as the series of higher lows, specific in bullish trends, will be broken.

Oil peaked at $77 so far this year. Fears of the Delta variant having a bigger impact on the economic recovery have dampened the growth outlook. China’s economic growth was downgraded, and so were the oil imports.

Moreover, the United States urged OPEC to increase its production, putting further pressure on the price of oil. If OPEC does so, more oil in a time with decreasing demand should translate into lower prices. 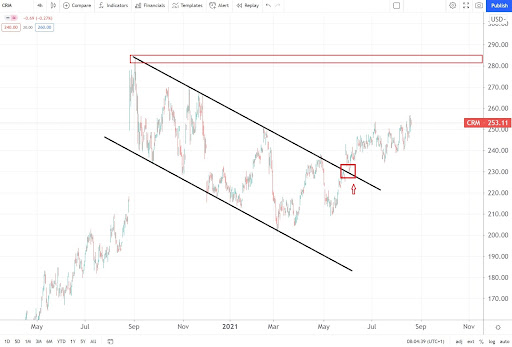 Salesforce is part of the Dow Jones index and investors await the Q2 2021 earnings scheduled for next week. The technical picture looks bullish, as the market broke out of a possible bullish flag pattern.

On the flip side, a drop below $220 will invalidate the bullish flag scenario. Typically, the price action that follows a bullish flag is equally aggressive with the one prior to the flag’s formation. Therefore, any correction should be out of the question. 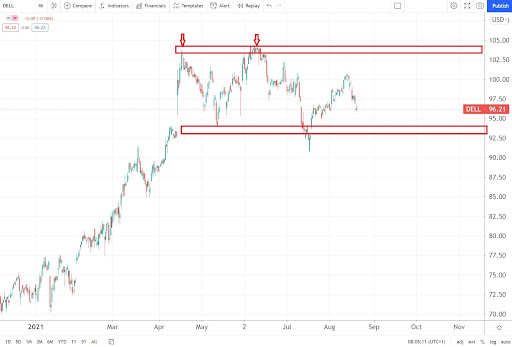 Dell made a possible double top pattern in the second quarter and broke the neckline on its move lower. However, the market moved back inside a horizontal consolidation area, bouncing from critical support.

Ahead of the Q2 2021 earnings expected to be released next week, Dell keeps a bullish bias if it holds above $90. To invalidate the double top pattern, the market must break above $105.

U.S. equity indices remain under pressure. The move lower triggered a risk-off environment across financial markets. As such, the USD/CAD and EUR/AUD pairs, which reflect the risk-off sentiment, gained the most. Finally, the U.S. dollar remains well positioned, as the Dollar Index trades at the highest levels in 2021.