Home > Should you buy Wells Fargo stocks ahead of next week’s earnings call?

Wells Fargo reports its Q4 FY2021 earnings next week. The market expects EPS of $0.94 on the quarter and the annual revenue estimate for the fiscal period ending December 2021 to be $75.84 billion.

Wells Fargo (NYSE:WFC) is a leading financial services company from San Francisco, the United States. It serves more than 10% of the country's small businesses and is one of the largest American corporations.

With more than 70 million customers and about 7,000 locations, Wells Fargo provides banking products and services throughout American. Next week, it reports the financial results for the last quarter of its fiscal year 2021 and the stock price is up +77.16% in the last twelve months.

Wells Fargo is a dividend-paying company with a payout ratio of 18.78%. The dividend is expected to almost double in the years ahead and to reach $1.8 by 2024.

P/E ratio is set to decline in the years ahead

The P/E ratio is slightly higher than the sector median (higher by 5.70%) and is projected to decline in the years ahead. As the Federal Reserve prepares to tighten the monetary policy, financial services companies tend to outperform in an environment of rising interest rates. 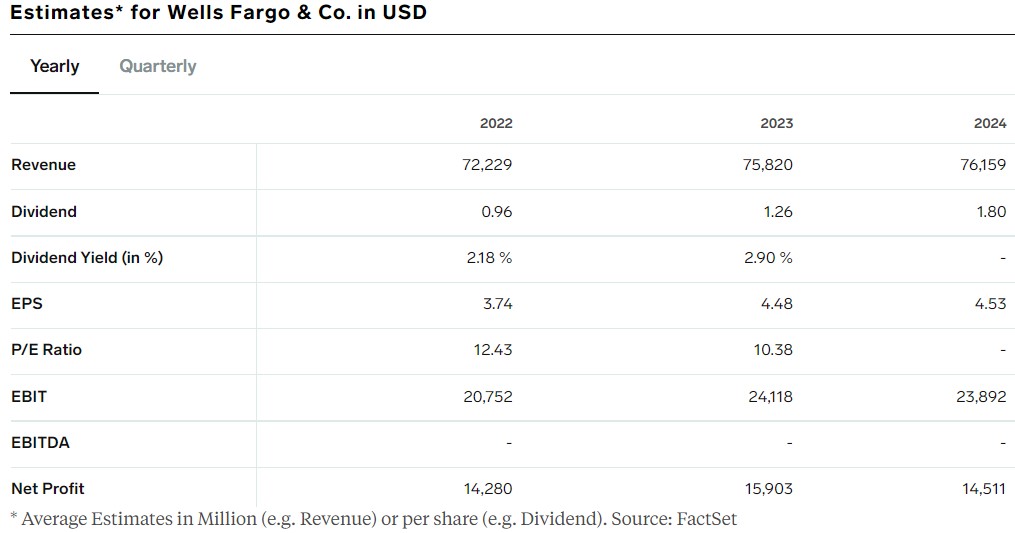 What do analysts say about Wells Fargo's stock price?

Analysts are optimistic about Wells Fargo's stock price. Out of the 47 analysts covering the stock, 23 have issued buy ratings and another 23 have neutral ones. Only 1 analyst has issued a sell rating.

This year, Barclays Capital raised its outlook on Wells Fargo stock price and upgraded it to buy with a price target of $62. The same did Morgan Stanley in December, but with a lower price target – $61.

Investors expect EPS of $0.94 on the quarter and the annual revenue estimate for the fiscal period ending December 2021 is $74.84 billion. If Wells Fargo reports EPS higher than the market's estimate, this would be the sixth consecutive quarter when it does so.

At the current market price, the company has a market capitalization of $202.27 billion, bigger than rivals such as Citigroup or Royal Bank of Canada.