Silver price holds above $22 ahead of key U.S. inflation data. The market focuses on the Fed's Powell speech at the Jackson Hole Symposium.

The trading week was dominated by slow price action and few important developments in financial markets. If there was a theme to talk about, it was the relentless move higher in the U.S. equity markets, which made a new all-time high each day of the week except yesterday. The same was noted throughout the trading month.

Silver price, just like the gold price, went nowhere this week. Several days earlier, the price of silver has tested important horizontal support, which held for the third time in a row. The bounce from $22, while very strong, failed to change the bearish bias in the commodity markets.

Oil, natural gas, gold – they are all up at the start of the trading day. The gains in oil price contributed to the risk-on environment, fueling the stock markets' rally. The WTI crude oil price is up close to 2% today and threatens to break the $70 level once again.

Speaking of the stock market, the recent rally is impressive. Yesterday, the European indices declined as the U.S. futures corrected. Several blasts near Afghanistan's main airport spoiled the risk-on mood, and the main indices corrected on the day.

But, the markets focus beyond that, as today Jerome Powell, the Chair of the Federal Reserve of the United States, holds a speech at the Jackson Hole Symposium. Because of the importance of this speech, the main moves in financial markets may lie ahead of us.

There has been a lull in the currency market this week, with the U.S. dollar remaining offered. Because the dollar gained in the past months against its peers, it could be that investors chose to book some profits ahead of the Fed's speech and critical inflation data. All in all, a pretty calm trading week so far, with some fireworks expected later in the North American session.

The main event of the day is marked in blue on the calendar below. Nothing matters for financial markets at this point more than the message from the Federal Reserve.

Jerome Powell is due to speak about the economic outlook and some investors already speculate that the Fed is reassessing the impact of the Delta variant of the virus. Initially, the event was supposed to be in person, and only last week the Fed announced that it is going to be virtual. Hence, it may be that the Fed suggests that the risks of the Delta variant are too high for the economy as well, and thus surprise markets with a dovish message.

Before the speech, though, financial markets participants will find out if inflation is, indeed, temporary, as the Fed insists. The Core PCE Price Index is due at the start of the U.S. session. It is expected at 0.3% vs 0.4% in the previous month. Any deviations from the forecast will move the markets ahead of Powell's speech. 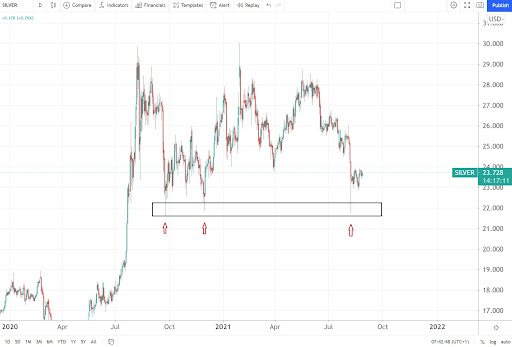 Silver found important horizontal support at the $22 area. It bounced from the lows, but the bearish bias persists. We see silver consolidating between $22 and $28 for more than a year now, looking for direction. To some, the pattern is bullish, looking like a continuation pattern similar to a triangle. To others, silver may have formed a double or a triple top, a reversal pattern, and more weakness lies ahead. One thing is sure – as long as the $22 level holds, silver remains bid on every dip. 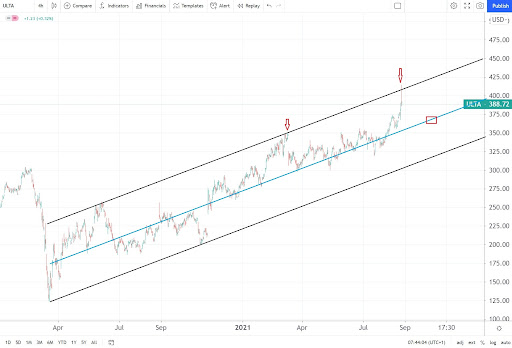 Ulta Beauty announced its quarterly earnings this week and delivered a positive surprise. It earned $4.56 EPS vs $2.56 expected, and the results sent the price at a new high. However, on its way up, it met dynamic resistance. Coupled with the weakness in the equity markets seen yesterday, the price corrected despite the better than expected results. Moving forward, the market may find support at half of the rising channel and will likely consolidate around the $400 level before the next important move. 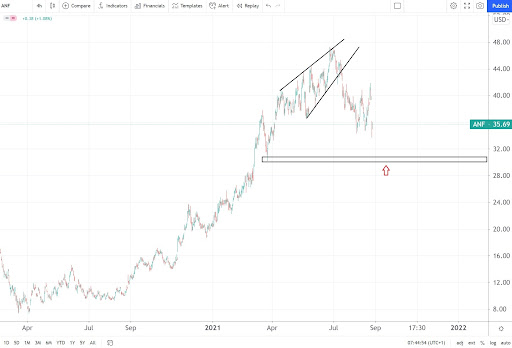 Abercrombie & Fitch also delivered its quarterly earnings this week. It announced EPS double the market's expectations, yet the news was not enough to support the price. The market formed a rising wedge pattern that broke lower in July. This is a reversal pattern that is often fully retraced, meaning that the price may reach $30 sooner rather than later. Still, the price is in a strong bullish trend, and, without general weakness from the stock market, investors will likely step in and buy the possible drop in the $30 area.

It is difficult to pinpoint winners and losers this week because of the typical summer trading environment. Stocks remain strong, both in the United States and in Europe, despite yesterday's correction. The U.S. dollar gave back some of its recent gains and traded with a bearish tone ahead of the main event of the trading week. Oil is the star of the trading week, threatening to break the $70 level and bouncing strongly from the recent lows.