GameStop stock price failed at $200 after the Q2 2021 earnings report. The Q2 2021 EPS missed by $0.09, but the company reported stronger than expected revenues.

The stock price’s reaction was mixed – failing at $200 but keeping the series of higher highs and higher lows seen recently. 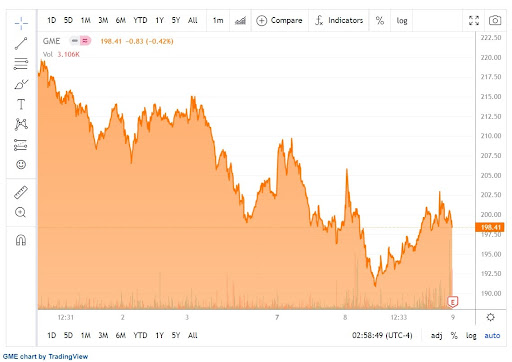 One of the biggest surprises came from the net sales generated for the quarter – up to $1.183 billion, higher than the $942 million reported in the same period last year. Also, the company’s cash and restricted cash position improved, reaching $1.78 billion.

Long-term debt declined, and the company has none of it at present. Moreover, GameStop has invested in adding new items to its product catalogue and entered into leases in the United States with the intention of building  U.S.-based customer care operations.

Having said that, the company keeps losing money, albeit not that much as compared to the same period last year. The net loss fell to -$61.6 million from -$111.3 million.

GameStop stock price performance this year and in the last 12 months has nothing to do with the company’s financial performance. Instead, the shares were benefiting from a short-squeeze triggered by a large group of retail traders organised on a social media platform who bought in unison.