The U.S. stock market indices are back at their highs, recovering most of last week's decline. In addition, the S&P 500 outlook remains bullish while trading above 4,300 points.

As we quickly approach the end of the trading month, the focus remains on central banks and central bankers' speeches. This week is full of interventions and guidance, so expect the volatility to be higher than usual.

In Europe, the trading week began with the Spanish IBEX index outperforming its peers, up by 1.46% on Monday. However, in Germany, the Dax index did not like the uncertainty of the federal election outcome as coalition talks might extend for weeks and even months ahead. As such, it gave up its early gains and closed the day in the red. The FTSE 100 index in the United Kingdom ended the first day of the week almost flat, down by 0.16%.

The oil price rally continues unabated, up again today, and trading close to 2021 highs. The developments in the energy markets are more than interesting, decoupling from the rest of the financial markets. For example, while the WTI crude oil price trades above $76 and rises, the U.S. dollar gains against its G10 peers, as seen by the EUR/USD exchange rate dropping well below the 1.17 handle.

Today, it is all about the Fed. First, Jerome Powell testifies in front of the U.S. Senate Committee on Banking, Housing, and Urban Affairs, and the questions and answers session should be more than interesting for markets. Second, Fed members Bowman and Bostic will provide further forward guidance to market participants with their interventions.

The S&P 500 index has met dynamic resistance offered by a rising trendline and got rejected for now. The 4,300 level appears to be key for the bullish scenario, as the index bounced strongly from it. 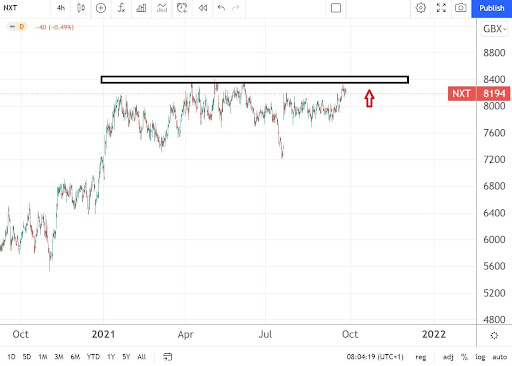 Next PLC announces its quarterly earnings tomorrow, and the stock price struggled in 2021. We see a horizontal level offering resistance, and a daily close above 8,400 might be just the signal the bulls await to go long. 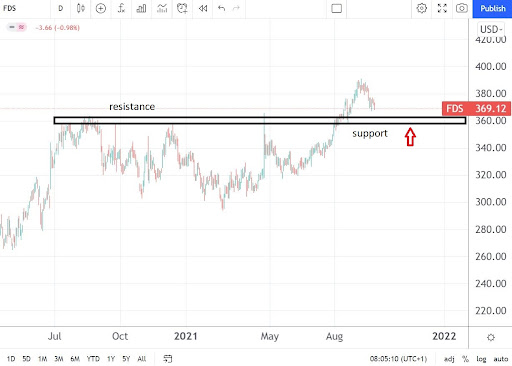 Factset announces its Q4 FY2021 results today, and the stock price just broke above key resistance recently. The $360 area should act as strong support, and if it holds, the bias is that the market will try for a new higher high.

Oil remains the undisputed winner, as the energy prices keep soaring; the euro looks weak in light of the German federal election outcome.