Dow Jones tests dynamic support as the market’s outlook turned bearish after the Labour Day holiday. Tesla and PayPal are in focus today as crypto slides and PayPal buys Japan’s Paidy for $2.7 billion.

The short trading week started with a bang for the U.S. equity traders. Perhaps as a late reaction to the poor jobs report from last Friday, equity markets in the United States corrected yesterday.

The mood turned bearish after the long weekend as the Dow Jones declined close to five hundred points. On its way lower, the index reached dynamic support at 35,000. That is where the futures market hesitates at the moment.

The weakness in the U.S. equity markets failed to trigger a risk-off move. In fact, the USD/JPY pair, which acts as a bellwether in risk-off situations, rose above 110. However, the U.S. dollar gained across the board in a move that may gain more ground ahead of the Fed’s meeting in September.

European markets opened today on a weak note. The Dax index in Germany is well off its yesterday’s highs, trading at 15,660 and opening down over -1%. Similar declines are seen in European indices.

On the commodity front, gold failed to hold above $1,800. The move lower came in the context of a stronger U.S. dollar. Oil, on the other hand, remains bullish, trading above $68 and keeping an eye on the $70 level. Similar strength is seen in the natural gas price.

Today is important for at least three reasons. First, we need to see if the move lower in the U.S. and European equity markets continues. If yes, a risk-off move should trigger some strength in the Japanese yen.

Second, the BOC Rate Statement and the Ivey PMI are closely monitored by Canadian dollar traders. The Bank of Canada is one of the first central banks that started to taper its asset purchases and investors await more guidance.

Third, the U.K. traders look for guidance from the Monetary Policy Report Hearings. During the hearings, the Bank of England’s Governor and some Monetary Policy Committee members discuss inflation and the economic outlook. 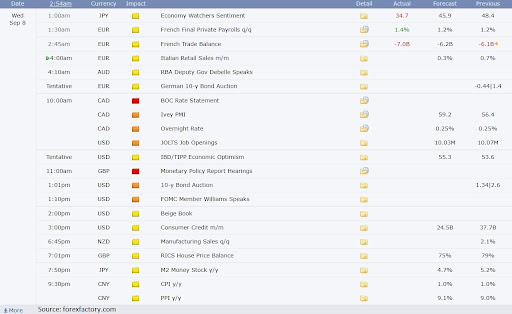 Today’s markets to watch are Dow Jones, Tesla, and PayPal. 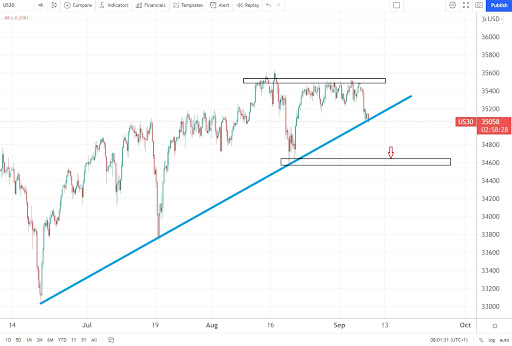 Dow Jones looks weak here, especially if it breaks below the 35,000 level. More weakness is seen on a move below 34,600 as the series of higher lows is broken on such a drop. 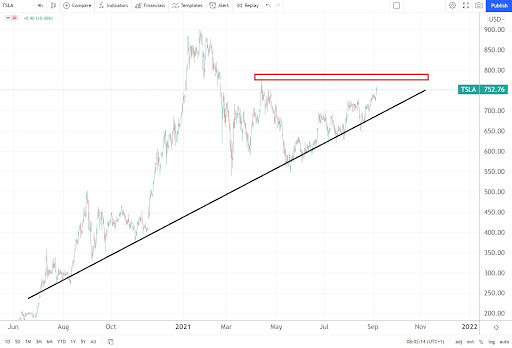 Yesterday, El Salvador became the first country in the world to adopt Bitcoin as its currency. However, the timing was far from perfect – the cryptocurrency dropped on the day, triggering a bloodbath in the crypto market.

Yet, Tesla held steady. Tesla is one of the companies that invested heavily in Bitcoin and its stock price traded in a tight correlation with the digital asset. It appears that the correlation ended and Tesla stock price looks constructive on a daily close above $800. On the flip side, a drop below $650 is bearish. 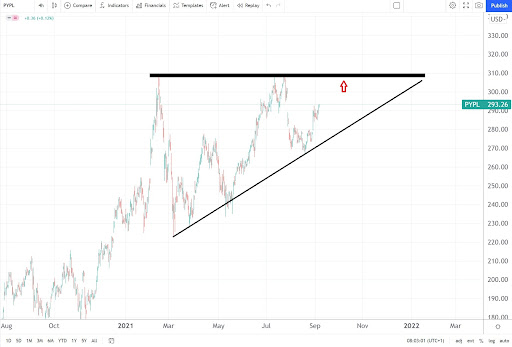 PayPal made headlines with its announcement that it buys Japan’s Paidy for $2.7 billion in cash. Paidy has more than six million registered users and offers payment services enabling online purchases. The online shopping volume tripled in Japan in the last decade, attracting PayPal’s interest. The technical picture points to a possible ascending triangle. A daily close above $310 should trigger more strength, while a drop below $270 invalidates the pattern.