Dow Jones bounces from the lows as investors overcome growth concerns. FedEx stock price trades with a bearish bias ahead of the quarterly results. Adobe remains bullish ahead of the earnings results.

The equity markets in the United States recovered some of the losses from the first part of the trading week. Dow Jones, in particular, rallied from the lows, overcoming investors’ growth concerns. However, the 35,000 level provides strong resistance for now.

Financial markets have consolidated in tight ranges so far this September. Commodities, for instance, led by oil and gold, keep their recent levels of $70, respectively $1,800.

The price action in the currency market is slow, too. Take the EUR/USD pair, which has traded around 1.18 for about a week now, despite numerous events that could have triggered volatility.

European stock markets follow the price action seen in the United States. They remain bid but have a hard time making new highs. The FTSE 100 found strong support at the 7,000 level, while the German Dax index failed at 16,000.

Moving forward, the rest of the trading week may bring more of the same. Investors await the Federal Reserve interest rate decision scheduled for next Wednesday, when the central bank is expected to announce the tapering of its asset purchases.

Today’s economic calendar has something for both European and North American traders. In Europe, Christine Lagarde, the European Central Bank President, is scheduled to hold a speech about the economic developments in the Euro area. Questions from the audience are expected, so the euro may be on the move.

During the North American session, the Canadian Housing Starts and the Retail Sales in the United States are the major economic releases of the day. The market expects the monthly Retail Sales to decline by 0.7%. 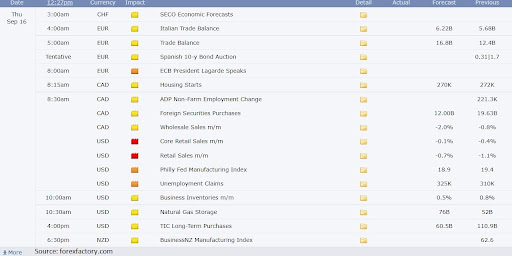 Today’s markets to watch are Dow Jones, FedEx, and Adobe. 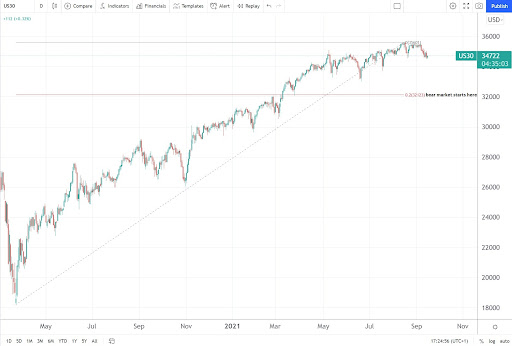 Dow Jones has traded with a bearish tone lately, and because of that, it is wise to put things into perspective by looking at the bigger picture. The index is close to record highs, and only a drop below 32,000 would mean the start of a bear market. Until then, the likelihood is that investors would buy any dip. 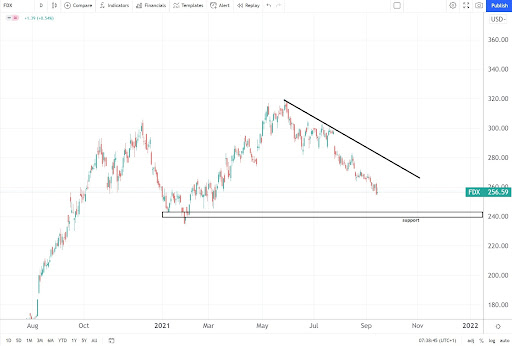 FedEx is well off its 2021 highs, and next week it releases its quarterly earnings. The stock price is on track to post the third consecutive monthly decline, and a daily close below $240 would bring even more weakness. 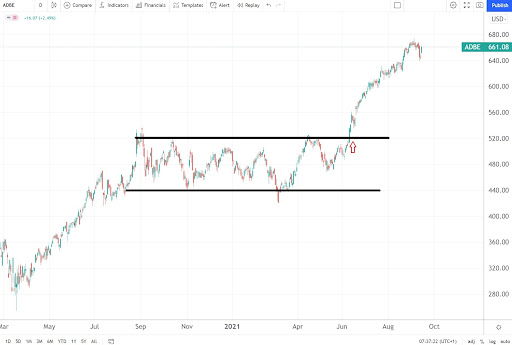 Adobe also releases its quarterly earnings next week. At the end of June, the stock price broke out of a bullish flag formation. The market remains bid, and a move at the $700 should not be ruled out.

Oil price trades about $72, trading with a bullish tone. The Japanese yen pairs are weak, led by the EUR/JPY, which dropped below 129.