Dax remains bullish ahead of historic reform. It keeps pressuring the 16,000 points before the introduction of another ten companies in its composition. Microsoft boosts dividends and announces shares buyback plan. Apple stock price was unimpressed by yesterday’s product launch event.

In a few days from now, the German Dax index undergoes a historic reform – the number of its constituents increases from 30 to 40 companies. It is an attempt to make the index more attractive to investors and to modernise it by introducing new companies in rising industries.

The index has traded as high as 16,000 points this summer, and it consolidated just below the level ever since. The consolidation may continue as investors await the outcome of the German elections. The federal elections in Germany are due on the 26th of September, and the social democrats are in the lead. Should they win, the challenges arise to form a new government.

Yesterday it was a risk-off move for financial markets after the release of the inflation data in the United States. Initially, the stock market indices increased as inflation slowed down in August, out at 5.3% from 5.4% in the previous month. But the mood turned sour shortly after, as the Dow Jones dropped to its lowest levels in a week.

The move lower triggered a move higher in the U.S. dollar. Financial market participants suddenly realised that the Fed committed to tapering into a falling inflation environment, which is not your everyday bullish stock setup.

In the meantime, the U.S. futures are in green territory. Of course, it may just all be simply a correction ahead of the main event ahead – the Federal Reserve meeting scheduled one week from now.

Gold regained the $1,800 mark after the inflation data. A surprising move, to say the least, probably based on technical grounds. Falling prices should weigh on the price of gold. Oil remains strong, trading above $71 and finding bids on every dip.

Another day and more inflation data are due. In the United Kingdom, the CPI rose to 3.2% annually, much higher than expected and certainly much higher than the 2% target set by the Bank of England.

Later in the trading day, the Canadian inflation and the U.S. Industrial Production are two pieces of economic data that may move markets during the North American session. 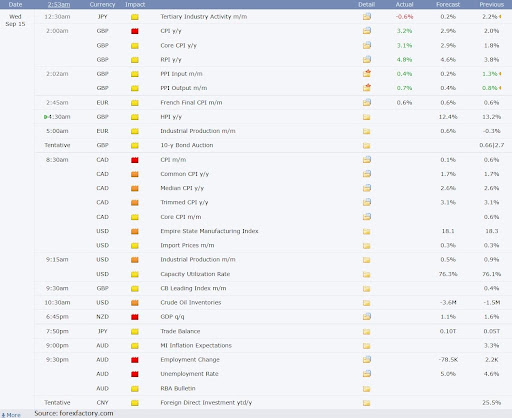 Today’s markets to watch are Dax, Microsoft, and Apple. 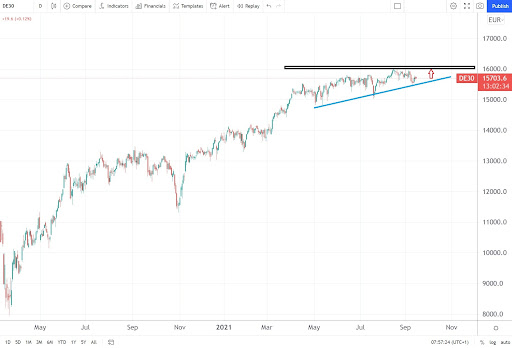 The 16,000 level looms large for the Dax index ahead of the introduction of ten new companies in its composition and ahead of the German federal elections. Therefore, a daily close above the level should trigger more strength. 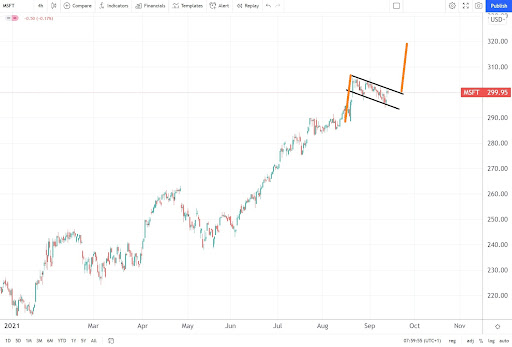 Microsoft surprised markets by announcing a dividend boost of 11%. It also said that it would set a new $60 billion buyback plan, another bullish news for the stock price. The price is in a possible bullish flag from a technical perspective, with the measured move pointing at $320. 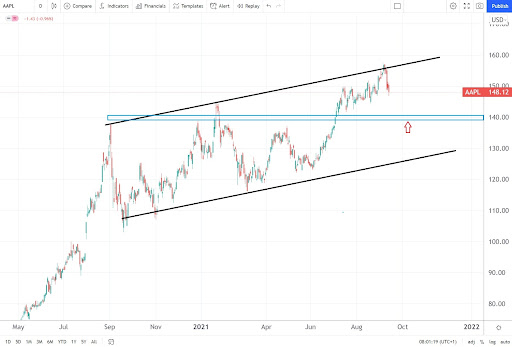 Yesterday’s Apple event failed to push the stock price higher. The market reacted at dynamic resistance, and now $140 appears as the next level of support.

U.S. equities declined after the inflation data; the price of oil remains bullish.